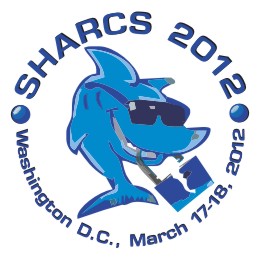 CERG was an organizer of SHARCS 2012 - Special-Purpose Hardware for Attacking Cryptographic Systems workshop held in the Washington Marriott Hotel on March 17-18, 2012. Dr. Kaps served as a general chair of the workshop, and Dr. Gaj was one of the two co-chairs. Graduate students from CERG provided technical and logistic support during the event. This edition of SHARCS had more than 70 participants from 19 countries of 5 continents. The slides of all presentations and the workshop record are posted on the SHARCS 2012 website. An extensive record of the entire series, including all slides and papers from the previous workshops, is available at http://sharcs.org. (3/19/12)

Dr. Gaj attended DIAC 2012, the Directions in Authenticated Ciphers workshop, held in Stockholm, Sweden, on July 5-6, 2012. The workshop included 4 invited talks, 11 contributed talks, and multiple discussions. It laid the foundation for a possible future project regarding the design and evaluation of new authenticated encryption schemes. (7/9/12)

Dr. Gaj is a co-chair of the special track at ReConFig 2012

Dr. Gaj and Dr. Viktor Fischer from Université de Saint Etienne, France, are co-chairs of the special track on Reconfigurable Computing for Security and Cryptography at the 2012 International Conference on ReConFigurable Computing and FPGAs, ReConFig 2012, to be held in Cancun, Mexico, on Dec. 5-7, 2012. The submission deadline for this conference is July 21, 2012. (7/9/12)

Dr. Gaj is a member of the Program Committees of SPACE 2012 (International Conference on Security, Privacy and Applied Cryptography Engineering), to be held at the Indian Institute of Technology Madras, Chennai, India, on November 2-3, 2012, and FPT 2012 (The 2012 International Conference on Field-Programmable Technology), to be held at the Seoul National University, Seoul, Korea, on Dec. 10-12, 2012. (7/9/12)

Dr. Kaps gave a talk titled "Evaluating Implementations of SHA-3 Candidates" on April 13th as part of the Computer Science Seminar Series at Virgina Tech, National Capital Region. The presentation summarized the implementation results from our and other research groups. Comparing implementations of several functionally equivalent algorithms in a fair and balanced manner is a challenging task. Dr. Kaps briefly highlighted the difficulties and presented tools for fair, comprehensive, and automated evaluation of hardware and software implementations of cryptographic algorithms. (4/13/12)

Dr. Kaps and Dr. Gaj were awarded SBIR grant with McQ from DARPA

Dr. Kaps and Dr. Gaj have been awarded an SBIR grant with McQ Inc. from DARPA. The project title is Lightweight Public Key Algorithms (PKA) for Lower Power Environments. The project period for Phase 1 is January 1, 2012 to October 31, 2012, and the total amount of the award to GMU is $15,000 for Phase 1 with anticipated total funding of $22,700 including Phase 1 Option. (4/3/12)

The National Institute of Standards and Technology (NIST) started a public competition to develop a new Secure Hash Algorithm (SHA-3) in November 2007. NIST is expected to announce the winner later in 2012. From the submitted 64 entries only 5 algorithms made it to the final round. On March 22-23, the 3rd and final SHA-3 candidate conference was held in Washington D.C. During this conference research groups from all over the world presented their latest security analysis and implementation results for SHA-3 finalists. The Cryptographic Engineering Research Group (CERG) from GMU contributed to the state of the art of SHA-3 candidate implementations through 4 research papers presented at this conference. The papers covered high speed ASIC, high speed and low resource FPGA, and low resource software implementations. The paper "Comprehensive Evaluation of High-Speed and Medium-Speed Implementations of Five SHA-3 Finalists Using Xilinx and Altera FPGAs" was presented by Dr. Gaj and the paper "Lightweight Implementations of SHA-3 Finalists on FPGAs" by Dr. Kaps. The papers "Lessons Learned from Designing a 65nm ASIC for Evaluating Third Round SHA-3 Candidates" and "XBX Benchmarking Results January 2012" were in collaboration with research groups from Switzerland and Germany, respectively and were presented by their researchers. (3/24/12)

Dr. Kaps is a member of the Program Committee of (AHSA) Architectures and Hardware for Security Applications 2012

Dr. Kaps is a member of the Program Committee of the special session (AHSA) Architectures and Hardware for Security Applications at the Euromicro Conference on Digital System Design (DSD). DSD addresses all aspects of (embedded, pervasive and high-performance) digital and mixed hardware/software system engineering, down to micro-architectures, digital circuits and VLSI techniques. DSD 2012 will be held on September 5-8, 2012 in Cesme near Izmir, Turkey. (2/12/12)

Dr. Gaj is a member of the Program Committee of CHES 2012