Dr. Gaj and his former student Pawel Chodowiec have contributed a chapter entitled "FPGA and ASIC Implementations of AES" to the book Cryptographic Engineering, edited by Prof. Cetin Kaya Koc. This book is a first comprehensive text on Cryptographic Engineering, the discipline this GMU research group is specializing in. The book includes 18 chapters, has 522 pages, and was published by Springer on December 2, 2008. (12/02/08)

Dr. Gaj is a member of the Program Committee of AfricaCrypt 2009

AfricaCrypt 2009 is the Second African International Conference on Cryptology, to be held in Gammarth, Tunisia, on June 21-25, 2009. It is sponsored by the IACR, the International Association for Cryptologic Research. (11/05/08)

Marcin Rogawski is joining the CERG team from Poland. He received his M.S. degree from Military University of Technology in Poland and has been working in industry for 5 years. Marcin's adviser is Dr Gaj. Xin Xin is joining us from China where he graduated with a M.S. degree from Huazhong University of Science and Technology in 2008. Xin's adviser is Dr. Hwang. (8/25/08)

Prof. David Hwang of the Cryptographic Engineering Research Group received a Ralph E. Powe Junior Faculty award to support his research on Anti-Tamper Techniques for Secure Embedded Circuits. This is a very competitive award given by the Oak Ridge Associated Universities (ORAU). You can read more about this award at ORAU News. (5/19/08)

CERG is Local Organizer for CHES 2008 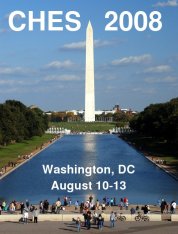 Workshop on Cryptographic Hardware and Embedded Systems CHES is the premier forum for presenting new results and scientific advances in all aspects of cryptographic hardware and security for embedded systems. It is an annual conference which publishes its proceedings in Springer's Lecture Notes in Computer Science (LNCS) series. This year is the 10th anniversary of this conference. It is held in the Renaissance Mayflower hotel in Washington, DC. Dr. Gaj and Dr. Kaps of CERG are general co-chairs. (1/11/08)